Something I've learned about photographing is that when you see a picture, you should get it then. If you put it off, it may not be there when you go to get it later. Other people change things without consulting you. So, when I saw this picture, I stopped and photographed it. Conditions weren't ideal, but I wanted to get it then, while I was there, just in case. There is a bridge behind me that casts its big shadow across most of my foreground. I also had a problem with casting my own shadow and the shadow of the camera on the tripod into the lower corner of the frame. I could have stayed and waited for the shadows to shift out of the way as the sun rose higher in the sky, but I had other places to be. The hazy sky and wan clouds weren't particularly to my liking either, but maybe it would look alright, I had hoped.   On the whole, the picture isn't satisfactory to me. 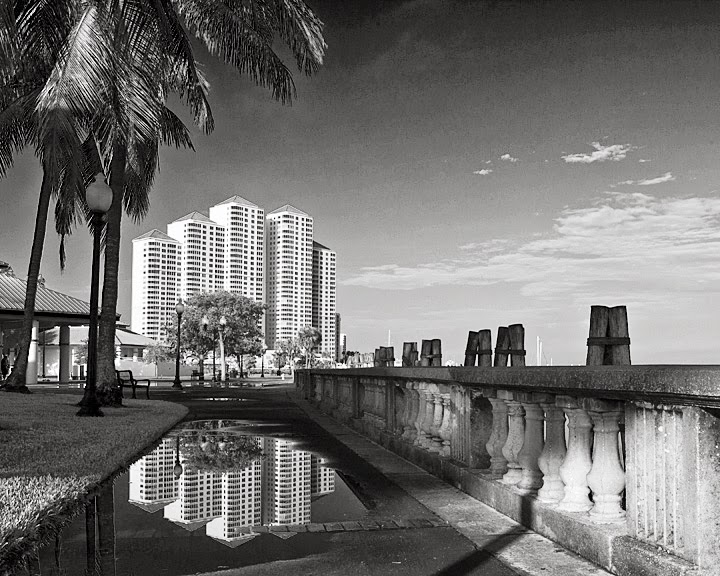 A week later, we had a great storm in the night. I knew that puddle would be there in the morning to give me a reflection and I could wait an hour or two later for the shadows to move out of the way. When I got there, I was glad to see that there was no public activity going on that would have added people and clutter to my scene.  Workers had just mowed the grass and were cleaning up with those obnoxious blowers with the motors on the workers' backs. My sidewalk was covered with grass clippings. They were all in my puddle, too. One of the workers came and blew most of the grass clippings away from the walk, except for a few and a cigarette butt and a bottle cap, which I picked up. He didn't blow the clippings out of the puddle. 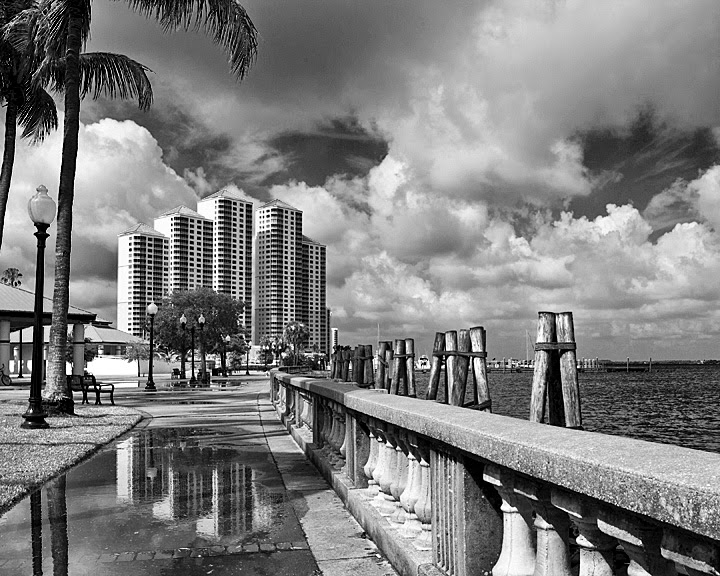 The picture of the second attempt is better than the first, although still not good enough. I prefer the higher positioning of the camera that better defines the curve of the railing and shows the water of the river and the horizon and the mooring piles.  In the first picture the piles look like something plopped on top of the hand rail.  Also with the shifted camera position, the lamp near the left edge of the frame is separated from the palm - a small detail, but I prefer it.  But then, they had trimmed the palms. I like the look of the untrimmed palms in the first picture better, the way the fronds kind of frame the roof of the building.  Maybe it was the palm fronds that had made me choose the lower camera position in the first picture, to keep the fronds from overlapping the building.  I can't remember for sure.   My wish for a better sky was granted, but now maybe it was too much. I would have liked more well defined billowy clouds with more distinct patches of clear sky. The grass clippings in the puddle aren't as deleterious as I had thought they would be, but there was a fresh breeze blowing and that is what mussed my nice reflection.

So, this is my method and my madness. I am an iterative photographer, trying again and again until I get what I want, or settle for what I've got, or give up. The next time we have a storm in the night or in the morning, the puddle will cover the walk (unless they fix the drainage) and I will try again.  Will conditions be more favorable?  Maybe not.  Will I ever get the photograph I see in my mind's eye?  Unlikely, but I do have proof of concept. 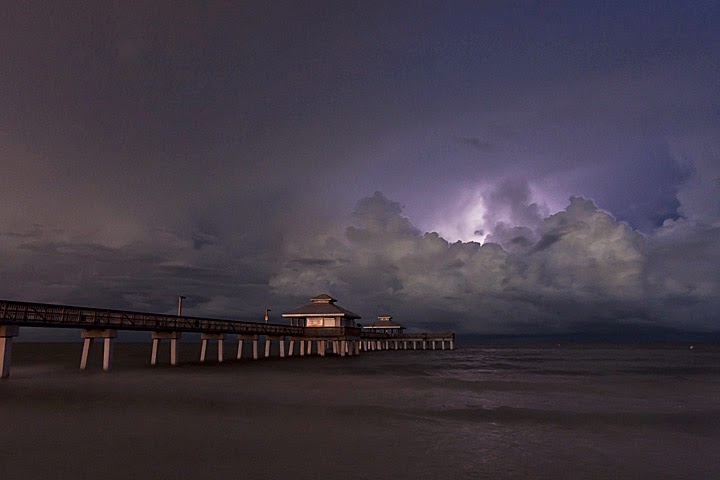 On my way to the beach I saw lightning in the predawn darkness. It gave me ambitious photographic thoughts. But by the time I arrived, the lightning excitement was over, with only a few distant flashes in the clouds out over the Gulf. 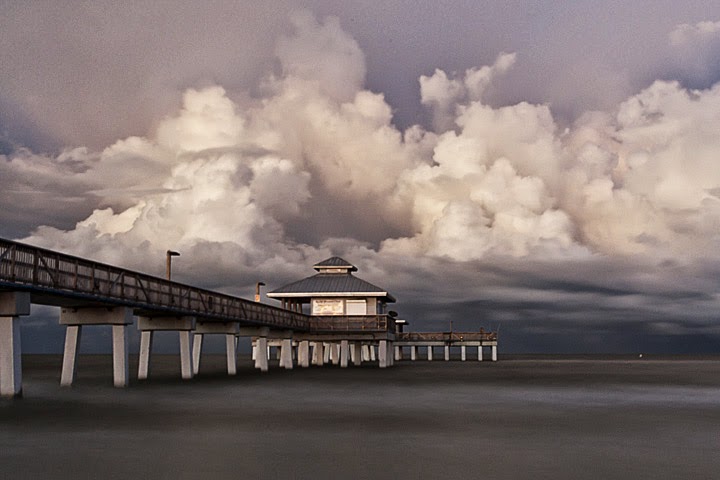 The thunder had quieted, but the clouds promised me they would be magnificent. When the sun lights them up, I mused, there will be great drama.  But as the morning grew lighter, the thunderheads drifted away and began to dissipate, without a glance over their shoulders to me and my expectations. 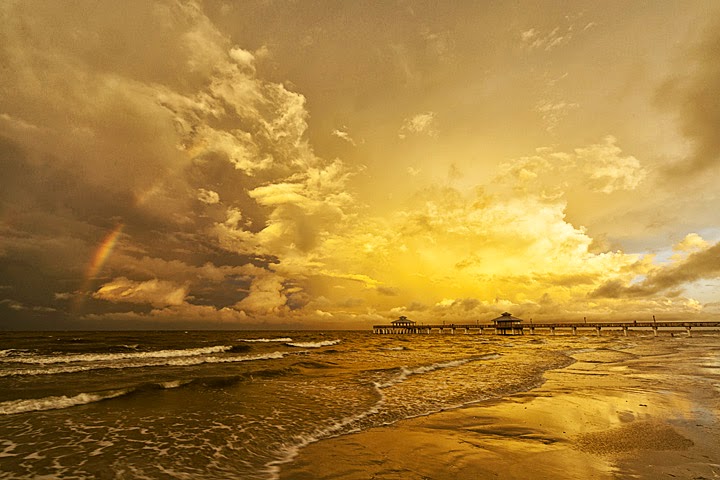 When the sun cleared the horizon behind me, it painted the sky with golden light for a few brief moments. And then, as the glorious glow faded, a rainbow gradually arched across the sky. 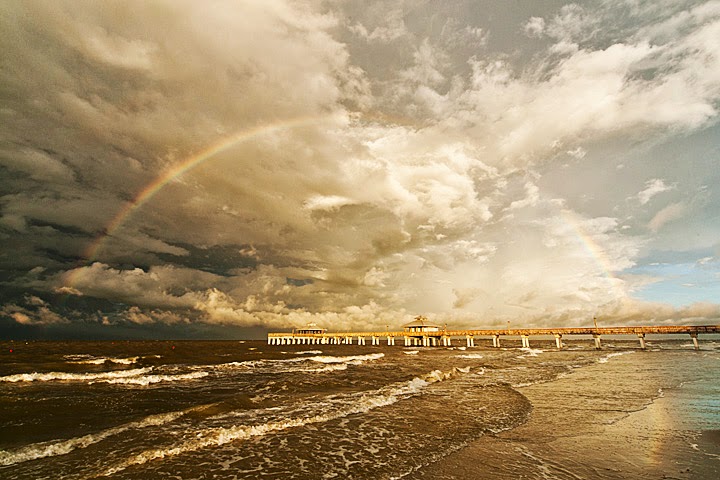 Forrest Gump reminded us that you never know what you're going to get.