The Osprey and the Shell Picker 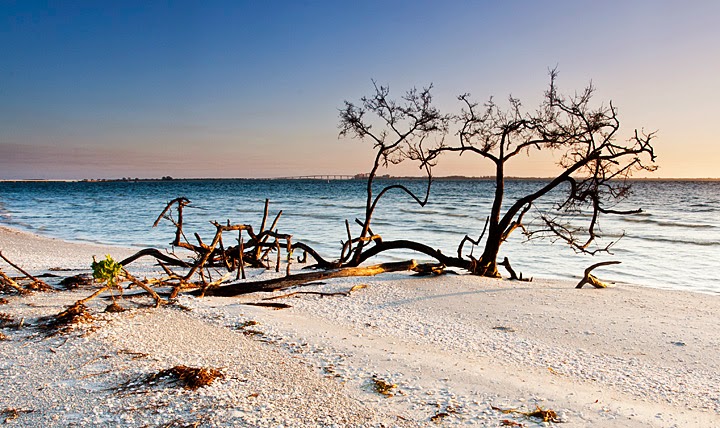 Beach erosion has taken this old buttonwood. It's still twiggy, but before too long it will be a picturesque snag, if some collector doesn't cut off its branches. I made this picture last week, at low tide. I had to wait about 20 minutes for a slow moving shell picker to mosey out of the frame. At one point she looked up at me as I stood waiting behind my tripod, arms folded across my chest, and said, “Oh, am I in your picture?” I nodded. “Sorry,” she said, and went back to her shelling. I went back to my waiting. 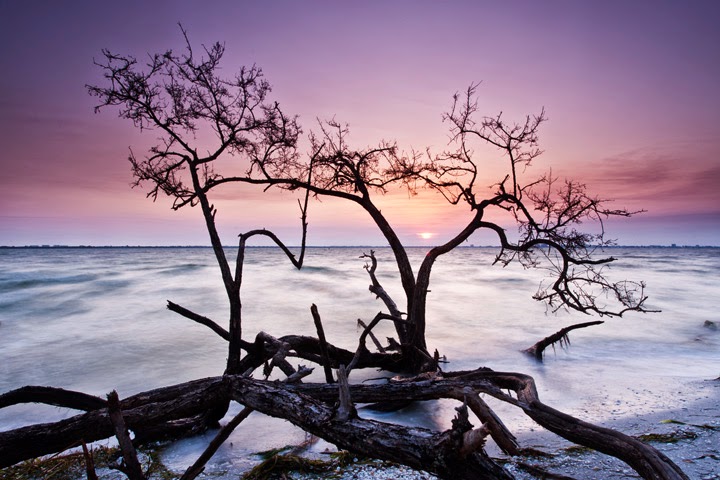 So, a week later it was high tide, according to the natural scheme of things. I returned to do it again, to see if I might be able do to it a little differently.  A neutral density filter and a graduated neutral density filter let me shoot into the rising sun with a long enough exposure (about two seconds) to turn the surf satiny. The tide and surf kept the shellers out of my frame but the ospreys were there, on a favorite perch right next to my buttonwood snag. 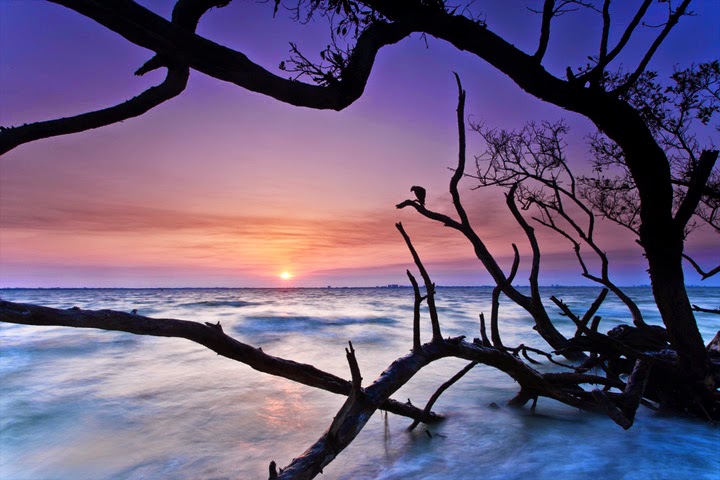 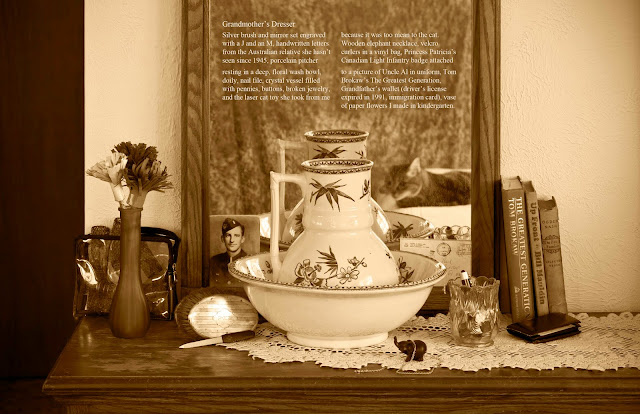 I participated in Broadsides – Poetry Off the Shelf at the Alliance for the Arts, a project in which artists create visual art to accompany poetry by local poets, with the poem to be printed directly on the artwork.  My assignment was Grandmother's Dresser by Marnie Heenan.  This was a challenge for me.  I had never before photographed a staged still life. The dresser in the image does belong to a grandmother, also known as my lovely spouse Peggy, who upon seeing my complete ineptitude, graciously volunteered to be my adviser in the project.

The thing about a poem, a descriptive poem like this one, is that it elicits images in the mind's eye of the reader that are necessarily different from what the poet sees.  Everybody's grandmother's dresser is different, so I felt I had the freedom of artistic license.  But when I looked at my first test photographs, I realized that we had so many of the things in the poem, I really needed do the best I could to try to replicate it.  It wouldn't be Marnie's grandmother's dresser, but I should try to photograph the poem complete, as I saw it in my mind's eye.  I had read it so many times by now that I knew all the items by heart.  And so began a sort of treasure hunt, an epic shopping adventure under the expert guidance of my adviser.

I experimented with the lighting, and finally settled on ambient window light, with no artificial lighting.  It required a longish exposure time, initially about 8 seconds. 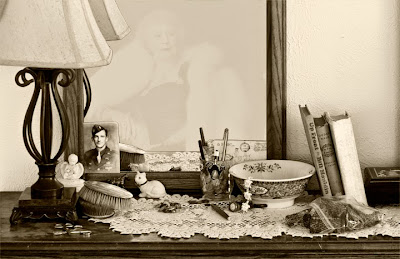 This dresser has a mirror, which of course captures an image of the photographer, who isn't in the poem.  I thought I would deal with this issue in post-production digital editing, that is, I would Photoshop it.  A mirror shouldn't be blank, so I had an idea of superimposing an image in the mirror.  The image I had in mind is a portrait of my grandmother, which I wanted to subdue so that it would seem soft and ghostlike.  On a fairly early test photograph, I roughed it in just to see how feasible this idea was.  It just didn't work; It didn't look good.

To hide myself from the mirror I used a plush throw blanket held in front of me and the tripod.  With some practice, I was able to squeeze behind the tripod, between the bed and wall, and to hold the blanket, so that my tripod and I were effectively hidden from the mirror.

Then something unexpected happened.  The cat, the one in the poem that the laser toy was too mean to, got into the act.  The bed is this cat's natural habitat.  When he moved into the frame to see what was going on, immediately he became a necessary element of the image.  Of course he didn't want to be where I wanted him to be.  The proverbial rule about herding cats came into play.  His inclusion in the photograph added a level of frustration.  In the low light of the windows, filtered through the sheer curtains, I had been using an exposure of eight seconds.  The cat wouldn't hold still for eight seconds.  I bumped the ISO one stop and opened the aperture one stop to reduce the exposure time to two seconds.  This was doable, I thought.  I could hold the cable release in my right hand which also held a corner of the blanket, and trip the shutter just when the cat was being still, for two more seconds I hoped.  So, picture this: I coax the cat into the right location on the bed, clamber over the spread legs of the tripod, grab one corner of the blanket in one hand and the other corner and the cable release in the other, try to position the button under my thumb, raise the blanket, and then the cat comes over to see what's going on, expletive deleted, try again. 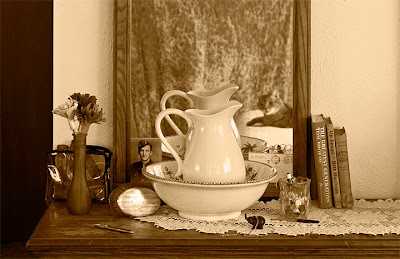 We tried numerous different arrangements on the dresser, trying this, trying that.   Finally I got it, nearly perfect, or at least as good as I could expect it to be.  By this time, I was ready to be finished. I started processing this image and discovered to my great chagrin that I had forgotten the wallet, which, when it wasn't performing its duties as a member of the still life company, resided in my pocket.

So, back to the old drawing board, as they say.   This time all the pieces were in place, the cat was reasonably cooperative, and, voila,  I had it.  After more than 200 photographs over the course of three weekends, it was done.  It still required post-processing, to convert to monotone sepia and to clone out the light switch and the small picture hangers on the wall, to hide the exposed edge of the blanket in the mirror, and numerous other small corrections and adjustments, but I finally had it - the image you see at the top of this blog post.

Marnie asked that I not put the full text of her poem in this blog post.  She hopes to get the poem published in a literary magazine, and they usually won't accept submissions that have been posted online. She did consent to my use of her name, and publishing the final Broadside image with her poem on it.  If you click on the image, it should enlarge, making the poem easier to read.

As it hangs on the wall in The Alliance, I wonder how many people actually read the poem, and how many look for the one item in the poem that isn't visible in the photograph.  I think most people probably don't see the cat.