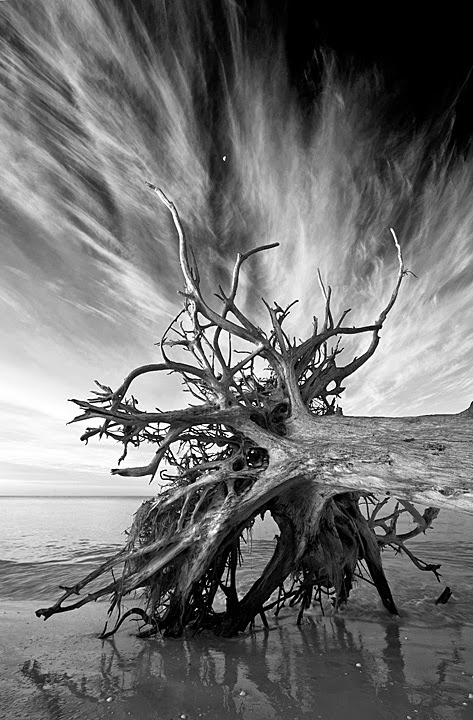 The newspaper article had said the beach renourishment project would be starting soon, Bonita Beach first then Lover’s Key, in August.  They’d be dredging the sand from Big Carlos Pass.  The last time they did a renourishment project at Lover’s Key was about ten years ago.  They’d had to stop for a storm – Charley in 04’ or maybe it was Frances or Jean, I don’t remember for sure.  Whenever they do a beach renourishment, they rake the beach clean of any snags, deadfall or driftwood.  I like to photograph driftwood.  I had made one good photograph of the deadfall there, ( First Quarter, December 2011 ) but I hadn’t been to Lover’s Key for a while.  I figured I’d better get out there and get what I could while the getting was good.  I didn’t really have a plan, just a notion that I should go soon, before it was too late.

After getting my morning coffee from the McDonald’s drive-thru I drove absentmindedly in my usual direction.  I didn’t make the turn to Sanibel – hmm, must be going to Fort Myers Beach.  After crossing the bridge to the beach, I made the turn to the south.  Smiling to myself, driving south down the island, I remembered Lover’s Key and the imminent dredging project.  Then, crossing the drawbridge over Big Carlos Pass I could see the dredges out in the Gulf, lit up in the dark. 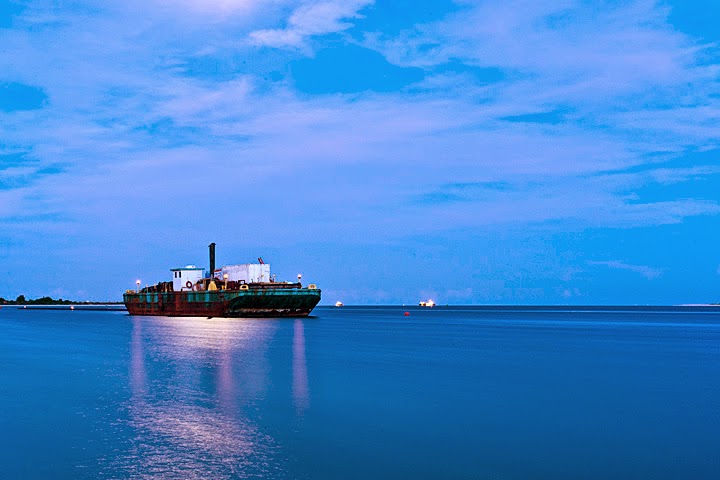 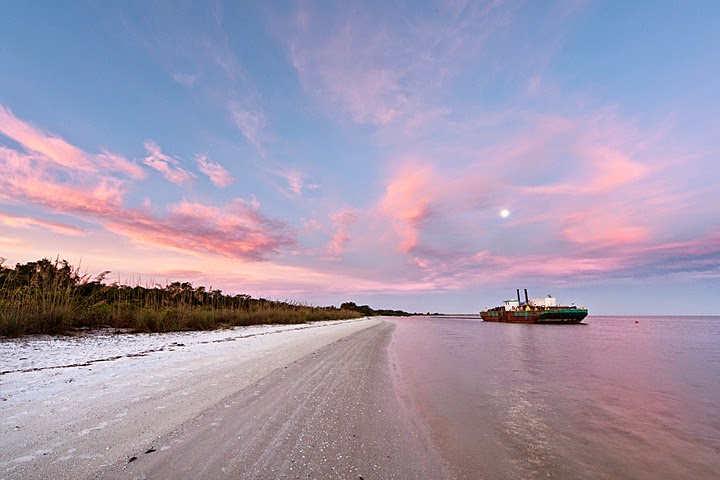 With my old tripod slung over my shoulder I came out from the path onto the narrow strip of beach that runs along the pass.  I saw the dredge barge anchored just off the little beach, and the yellowy-silverish rippley reflection of the full moon.  I walked a little way, to shift my perspective so the barge would be in the pool of moon shiny water, and stopped to make a picture.  The sky is blue and the water is blue, even the land is blue and the barge is blue in the moonlight.  The moon was too high for a good composition. I looked behind me to see the sky lightening where the sun would come up.  If I waited here for a little while, the moon would get lower and the scene before me would get lighter.  I explored the composition, walking up and down the beach, trying different lenses, biding my time.  I would’ve just walked on if it hadn’t been for the setting moon.  I have a thing for the moon.  Plus, I knew that the light would be no good to do anything with the deadfall on the Gulf beach.  And the barge was off my beaten photographic path.  Gradually, as the sun moved to meet its appointed time for sunrise, the wispy clouds over the Gulf began to turn pink.  I put on the ultra-wide to catch the whole sky.  I was really too far from the barge for the most pleasing composition but I exposed the sky anyway.  I figured that in the time it would take me to walk closer the nice color would fade, and so it did. 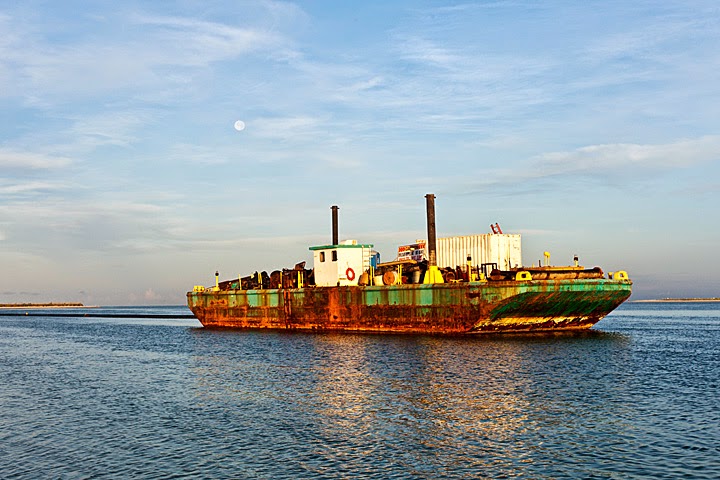 In the early light the barge began to show its color, so I dawdled, waiting for the sun to rise high enough to light it so I could make its portrait with its full-moon companion looking over its shoulder from a distance.  I knew that the old dead trees on the beach were still in the shade.  They’d wait.

When I did come to the old dead trees, there was a little vehicle in their midst – the ranger cart.  Not surprising; the times I’d been here before it had left its tire tracks in my foregrounds, or I had had to pick up my tripod to move out of its way.  It was straddling a clump of roots and its right rear wheel had dug itself into the sand, a couple of pieces of wood jammed under it in a futile hope for traction.  The ranger was walking away.
“I’ll help you get it out,” I called.
She turned and said, ”It’s okay. Somebody’s coming.”
So we waited; I for the sun to climb and for the cart to be out of my scene, and she for help to arrive.  I asked her when the renourishment was scheduled to start on this beach.
“In August,” she said, “after they finish Bonita Beach, down there.” She pointed.
I asked if she knew what date in August.  She didn’t, saying it depends on the weather.  Shortly, another ranger drove up in his cart.  An elderly man walking the beach was eager to help, despite his severely hunched-over posture. We got the cart unstuck.  The two rangers went their separate ways, the old man continued up the beach, and I was back to my mission of looking at dead trees.

I finally found what I thought was a good picture of the old trees, looking down the beach.  The hunchbacked old man, on the return leg of his walk, said from behind me, “They’re going to renourish this beach, you know.”
“Yes, I know,” I said.
“I don’t know why they’re dredging over there,” he said with an air of consternation, pointing at the dredges out in the Gulf off the pass.  Seeing the camera on the tripod, he asked, “You taking pictures?”
No. Whatever would give you that idea?  “Yes,” I said, “Do you know when they’re going to start putting sand on this beach?”  I asked, still hoping for a more definite schedule.
“In August, after they finish with Bonita Beach.  What you taking pictures of?”
“These old dead trees,” I told him, “They’ll probably take them out when they do the renourishment.”
“Oh, they won’t do that,” he informed me, “They’ll only do the beach down there, near the pavilion.  Why would they want to do it up here?”
“So the rangers won’t get their carts stuck on roots,” I thought.  I could see he was about to continue on his way so I asked him please to hold up a moment and turned to my camera.
“Oh, I won’t hold you up any longer,” he said and strode away.  I quickly pressed the shutter button, but not quickly enough, as his arm swung prominently into my frame.  So, as I waited for him to disappear into the distance on down the beach, more people came walking along, sauntering, moseying, dawdling, inspecting important pieces of flotsam.  Fishermen, wearing Larry the Cable Guy shirts, nosed their boats along the shore, casting their bait nets in the water near the dead trees, coming up empty and slowly motoring on down the beach.  I made a few photos with people looking down wondering if that shell was worth picking up and with small boats hovering between the boles of the trees.  Photojournalism, I mused; this is what Lover’s Key used to look like, before the beach renourishment project, back in ‘14.  I won’t get to be an artist this morning. 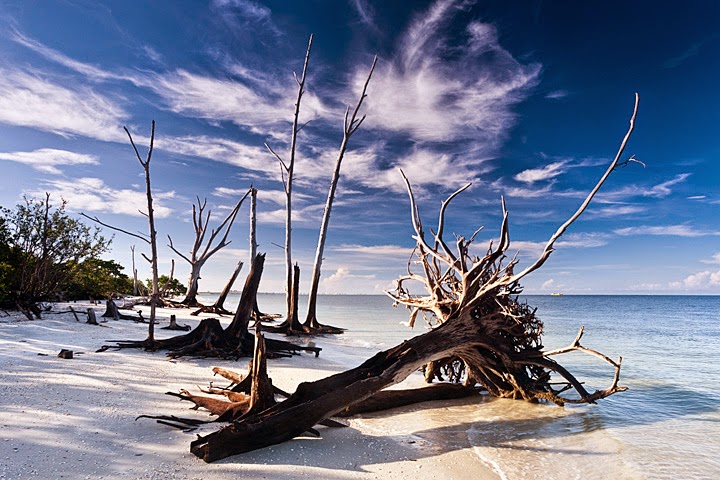 After a while, the people and the boats moved out of my frame, or they were hidden behind the trunks of the dead trees.  I exposed one final frame and headed back, wishing I had thought to make pictures of the stuck ranger’s cart and the hunchbacked old man.