Sitting, waiting, in the early morning stillness. Maybe the sun will show a little artistic gumption and paint the sky this morning. The night is just beginning to surrender.  I hear a big splash, then another.  Dolphins, I think.   In the darkness, I can just barely make out the movement on the water.   More splashes, right in front of me. I can see the roiling of the water, all around. There must be several. It's not uncommon to see a small pod moving along, rolling, blowing. But I wasn't hearing blowing, just splashing, and they weren't very close together the way they usually are when they're traveling, but rather they were spread out a bit. They must be feeding, or playing. I strain to see a fin or a fluke in the dim light. As it gets lighter, I can see the splashes.  Then I realize, it's not dolphins.   It's tarpon!  Big ones!  There must be a dozen or more of the big fish churning the surface.

The splashes subside. I return to the business at hand – my semiannual quest to make a photograph of the Sanibel lighthouse silhouetted by the orb of the rising sun. The sky at the horizon begins to take on a nice deep orange, reflected in the water. Nothing special, but I pop off a few. Faint crepuscular rays begin to form. I hope they will develop into a glorious sunburst, but no, it never achieves grandeur. 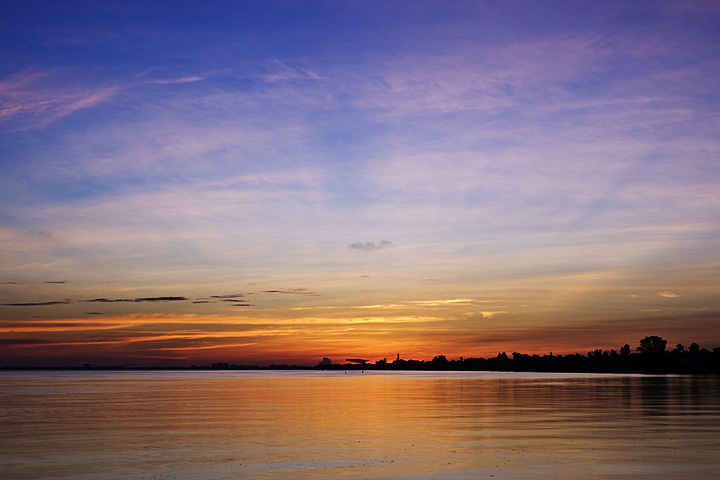 The glow of light concentrates behind the lighthouse, but I can tell that the wispy clouds are too thin to let the sun pretend to be a big red rubber ball.  It will blow the silhouette away with blinding light.  And so it does.

Once again I didn't get what I hoped for.  But I did get a nice subtle sunburst.  And, I shared my solitude with the tarpon. 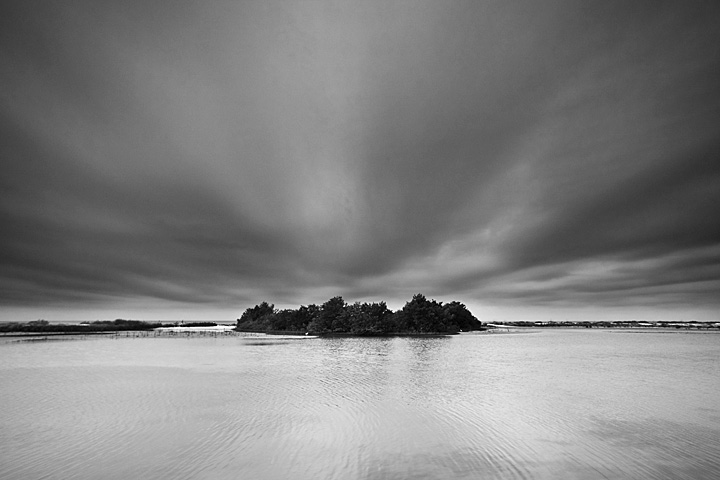 One is soft and smooth and organic, a quasi-minimalist study in the leading lines rule of composition.  I was chasing a bird, figuratively speaking, a white morph reddish egret. It had gone away and I was hoping it would come back. I could see it off in the distance, but it wasn't cooperating. I had my long lens and gimbal mount on the tripod. All of a sudden I saw this pattern in the clouds in the sky. I pulled out a wide-angle lens, removed the camera from the telephoto, and mounted the wide-angle on the camera. I abandoned the tripod and telephoto lens and ran along the edge of the water to put the island of mangroves under the center of the shape of the clouds. Hand holding, I made three exposures, before the sky smeared. And then the image was gone, just as quickly as I had seen it. The first of those three proved to be the best. The egret never did come back. A friend suggested that I entitle this photo Lost because it resembles a recurring scene from the television show of that name. I never saw the show, so I don't know. 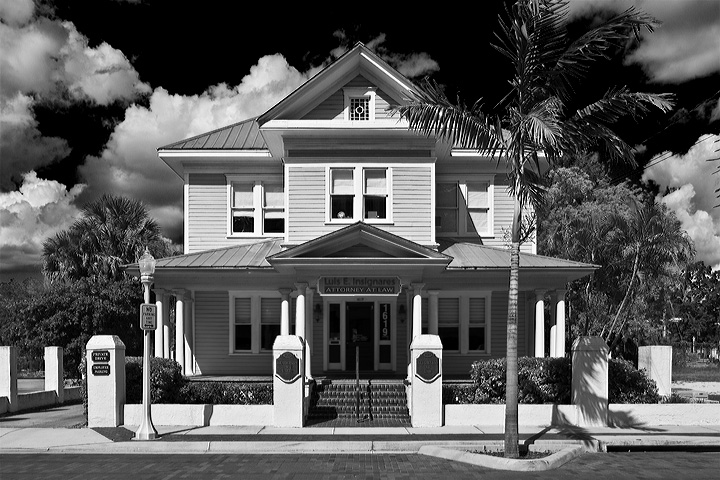 The other is sharp and hard, high contrast and orthogonal, a planned, pre-visualized photograph. I had eyed this building for a while – an old house converted to a law office in downtown Fort Myers. I am a morning shooter but this old house faces westerly and so it needed afternoon light. It would be nice if the sun could have washed the shadows from the porch, but that can never happen. Behind me is a four-story parking garage, which would cast its shadow on the street, then sidewalk, then porch, then house as the day grew older. I was gratified that I was able to catch this in one session. Usually I give it a handful of tries on different days before finally giving up.

In addition to the soft fluidity versus the rigid angularity aspects of the two photographs, there is to me the more striking difference of their tonal ranges. The histogram of Lost roughly resembles a standard bell curve. The tones gather towards the middle, with little pure black and white. The histogram of the Law Office shows the tonal range more evenly distributed across the range with slight spikes at the black and white ends. 'They' say there's no such thing as the right histogram, but I tend to strive for something like the Law Office for a black and white photograph. I like a black and white photograph to have blacks and whites. The histogram of Lost is more characteristic of what I would want in a color photo – no blown-out highlights, no blocked-up shadows – but in this case, I just felt that it worked better in monochrome.

In the final analysis, is analysis even necessary? Art is intuitive. You see what you like and like what you see – or not. Not that these execrable photographs are great art. I can analyze and explain them. I could tell you what I like and don't like about them, mostly the latter – all the little nuances and details. But after all is said, one must simply look – and maybe shrug.