Crepuscular means occurring during or related to twilight. Crepuscular rays are the sunbeams that occur before sunrise or after sunset. I sometimes call them a sunburst. I've heard them called sunbeams, God beams, or fingers of God. Whatever one calls them, a great sunburst -crepuscular rays- is a glorious thing to see. 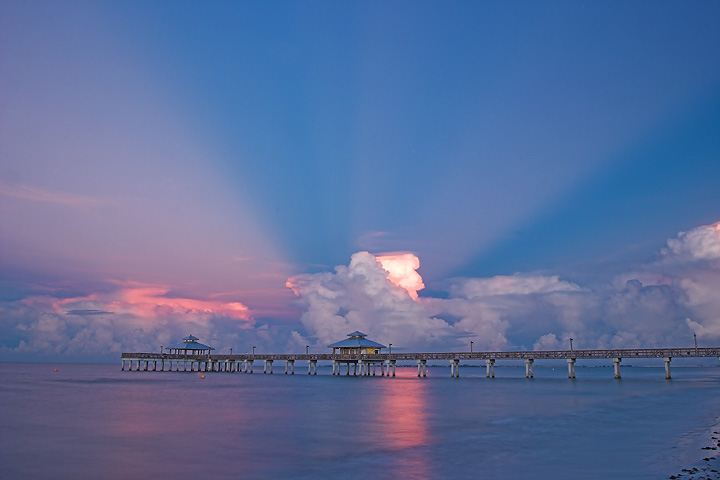 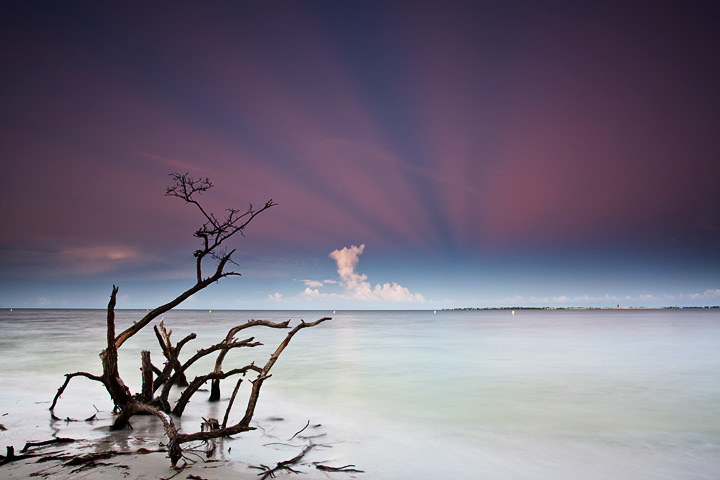 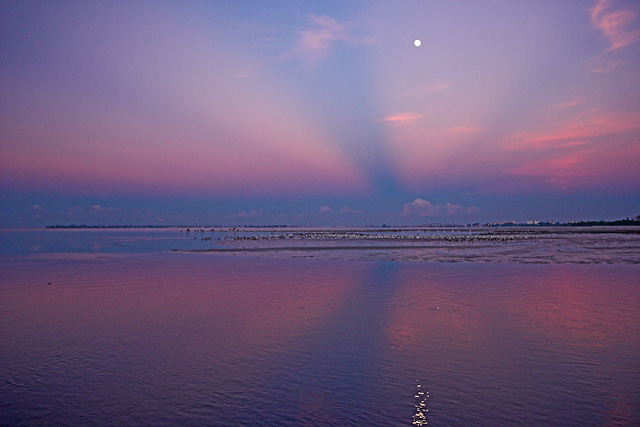 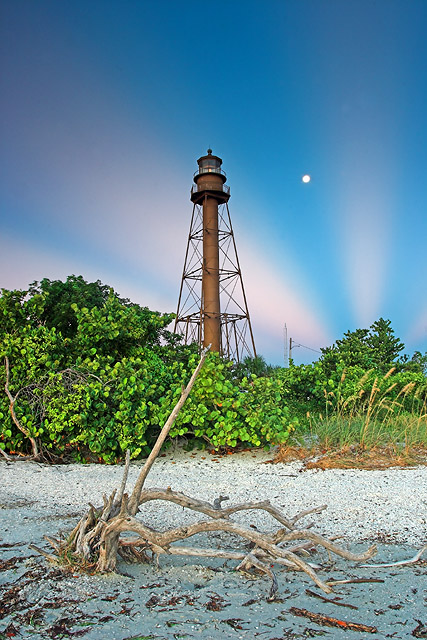 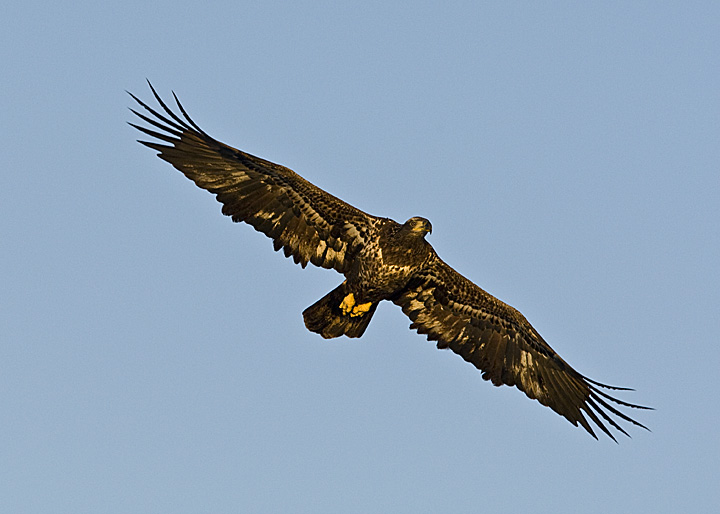 I began my photographic journey with birds, an old Minolta SLR, and a Sears zoom lens. As a frequent visitor to the J. N. 'Ding' Darling National Wildlife Refuge, it was only natural that I would photograph birds. Eventually I acquired a couple of Nikon cameras, a 300mm zoom, and an ancient 600mm f5.6 Nikkor lens. I became so accustomed to looking through a telephoto lens that the first time I put a moderately wide angle 35mm lens on the camera, it just looked weird to me through the viewfinder. After about a decade and a half of an up and down interest in photography the advent of the internet and image critique websites really whetted my interest. I started working on improving my technique and trying to make better bird pictures. When I switched from film to digital, I also switched from Nikon to Canon because of a particular Canon telephoto lens, the equivalent of which wasn't available from Nikon at the time – the 300mm f2.8L IS, a bird lens par excellence. (All of these images came through that glass.) I became an avid avian photographer and got pretty good at it, winning a couple of contests, selling a few bird photos, and such. I fell in with a cadre of bird photography cronies, some of whom only shoot birds and some of whom are very good. 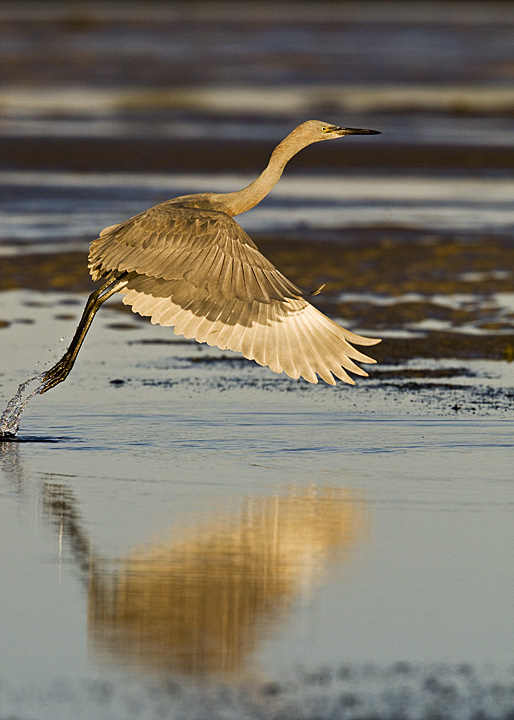 In the meantime, my photographic appetites became more diverse – landscapes gradually became my primary interest, along with architecture, urban scenes, portraits, and so forth. My cronies are turning out world-class photographs of birds while I reached an avian plateau. I haven't made an A-list avian photograph in nearly a year and haven't really tried to, other than the occasional drive through Ding Darling, usually after conditions proved unfruitful for landscapes. So yesterday morning, I decided to go back to my old ways, the first time in a long time I've headed out with birds being my primary intended subject. I went to one of my favorite bird photography places a little before sunrise and let myself get back into that comfortable old bird mode. The morning air was brisk -jacket weather- as I wandered across the flats exposed by the ebb tide. My feet were wet, but the chill didn't bother me. In fact, I was completely oblivious – lost in my pastime. I made about 400 exposures in about an hour and a half. I could feel that my skills had atrophied terribly – so many botched opportunities. Reviewing the photographs on the monitor at home, it didn't take much time to delete most of them, almost all of them. But it felt good to be back in the saddle again, so to speak. 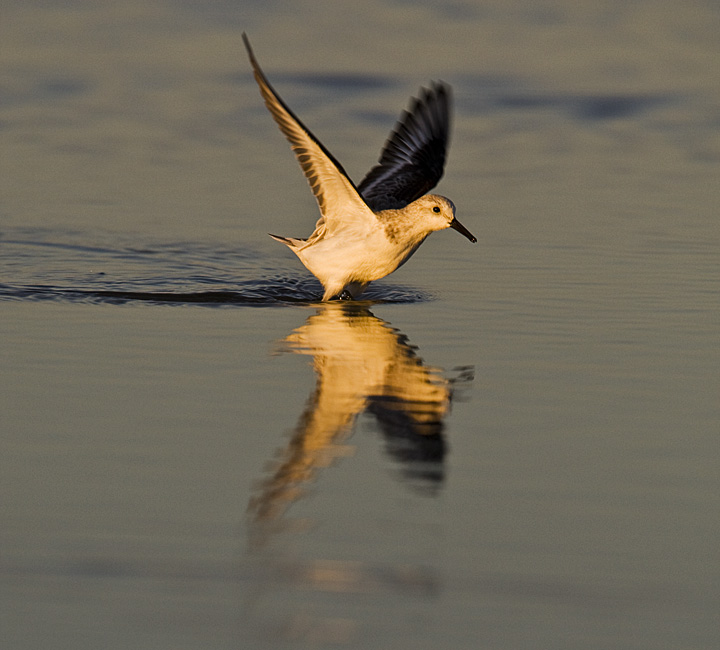 So here are a few of the morning's surviving images - a juvenile bald eagle, a juvenile reddish egret, a sanderling, and a coot. To be really good at something and stay good at it, one needs to do it a lot, and really work at it. So I'm not as good as I used to be and I'm not as good as some of my cronies, but it's not like I've lost every habit I ever had.- and it's still fun. 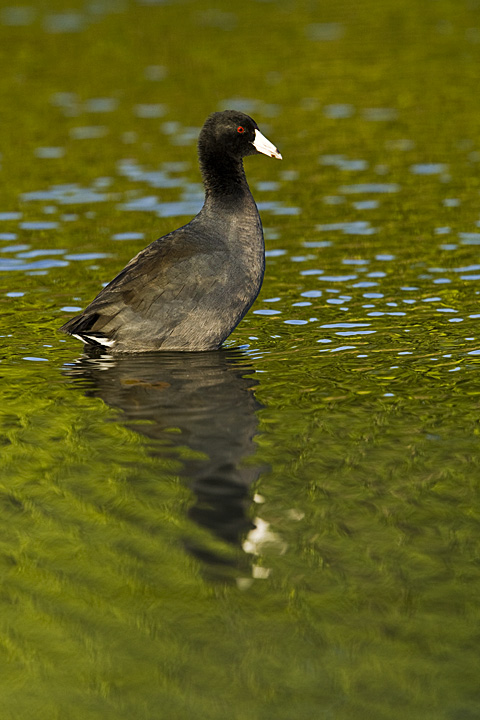 The full moon of November is known as the beaver moon.  My ephemeris told me that the beaver moon would be setting just a few minutes before sunrise on Wednesday morning.  If I positioned myself at the northernmost tip of Bowditch Point, I could watch it set behind the main span of the Sanibel causeway.  I set my alarm - 5:10 a.m.  I could catch the moonset before going in to work.  As I drove to the beach I couldn't find the moon.  It wasn't where it should be.  How does one lose a moon?  By the time I got to Bowditch Point, I realized that it had already set.  I must have looked at the wrong date.  Okay, so, maybe the sunrise would prove fruitful.   I doubled back, parked the car at a meter on Old San Carlos, grabbed the 300 and started the steep walk to the top of the Sky Bridge. No time - I walked briskly, carrying the big lens on my shoulder, breathing a bit heavily by the time I reached the crest.  I need the exercise, I tried to convince myself.  The sun made its appearance directly behind a pair of distant buildings, the only buildings on that part of the horizon.  I could just see its upper limb emerging between them.  Those buildings didn't use ta be there. I repositioned myself quickly, for a little better vantage, to get the sun out from behind those pesky buildings before it rose too high. The sun came up through a low layer of clouds and then rose into a clear sky.   And that was it.  [300mm, ISO 200, f11. 1/125] 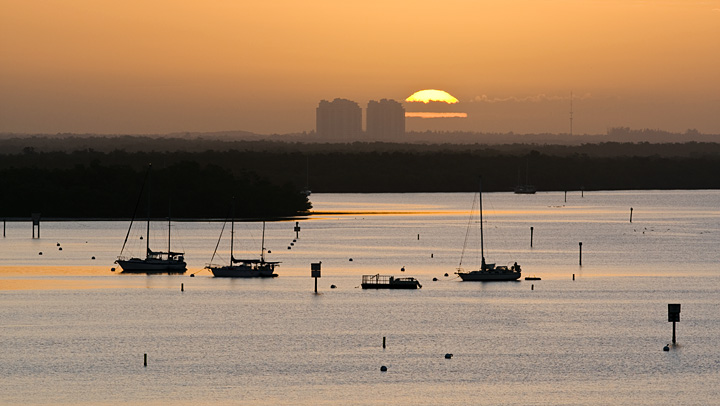 Thursday morning was the correct morning for the moonset I had been chasing. So there I was again before beginning my work day, at Bowditch Point about three quarters of an hour before sunrise and half an hour before moonset, The sky was clear. The moon was there, over the bridge where it was supposed to be, though it wouldn't touch the highest part of the span. As the full moon descended, the sky gradually grew brighter. Dropping toward the horizon the moon became a distorted orange orb, an oblate spheroid, as the angle of view thickened the atmosphere. I had hoped to be able to see the moon under the bridge but it sank into an invisible layer of cloud as it reached the railing of the bridge and disappeared, not to show itself below the span of the bridge at all.  That's okay.  I'll take what I can get.   [600mm, ISO 400, f11, 1 second]

After the moon took its leave, I just stayed where I was and watched the birds. Pelicans, wading birds, gulls, skimmers and shorebirds were all around, going about their daily business. There wasn't enough light for a shutter speed fast enough to stop their motion, so I just watched and basked in the morning. I was watching some pelicans on a Manatee Zone marker as the sun rose behind them, creating a silhouette against an orange sky. Mostly they just sat there, like preening lumps. Then one would leave and another would arrive. I hoped for some interesting activity – at least some typical comical pelican poses. Finally this trio gave me some satisfaction. As the great philosopher Mick says, “You can't always get what you want, but you get what you need." 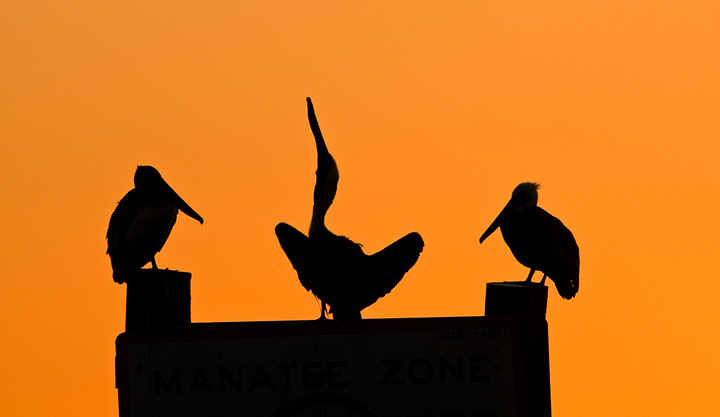