Last year I made a poster for Mary Margaret's birthday. So this year I made posters for her sisters, Caroline and Ellie, commissioned by their mother. 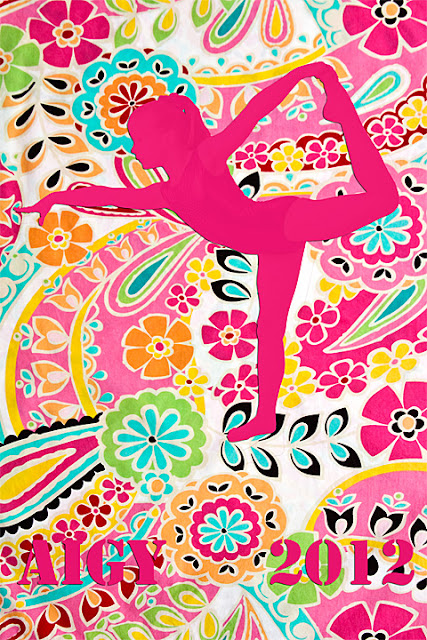 The girls did various poses in the studio. The posters had to match the décor of their rooms.  Mom picked the color schemes and selected the poses. The background of Ellie's poster is actually a photograph of a pillowcase she had brought with her.  It was difficult to separate her pink silhouette and lettering from elements of the pillowcase background, but finally, a thin drop shadow did the trick. 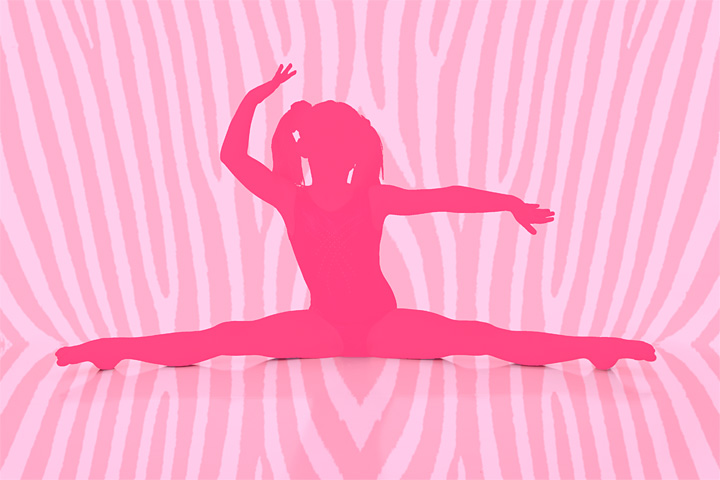 Caroline's background was tricky, too. She needed pink zebra stripes. I worked hard to retain her reflection on the studio floor so it makes it appear that she is sitting on the pattern instead of floating in front of it.  The striped pattern is actually a double mirroring. Placing the horizontal mirror line at the axis of her legs gives the serendipitous illusion that the pattern bends up behind her.

The 24”x36” posters were delivered in time for Caroline's seventh birthday.   The Olympics going on in London right now reminds me that the AIGY in Ellie's poster is for Aiken (SC) Gymnastics, whose owner competed with Nadia Comaneci in the Olympics in Montreal in 1976.

To Catch a Lightning Bolt 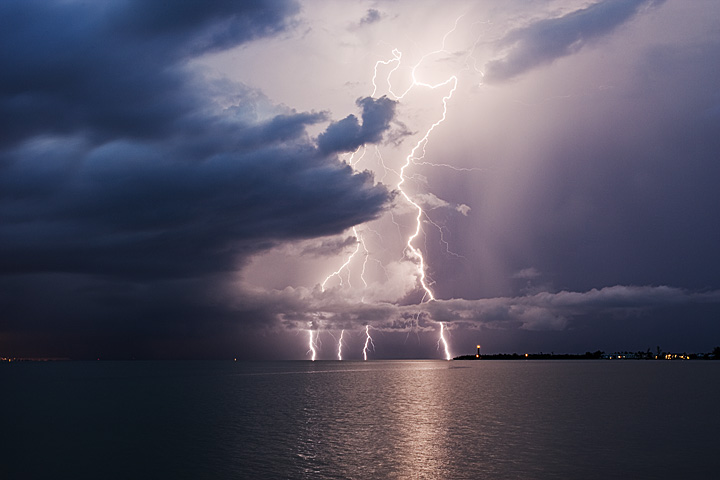 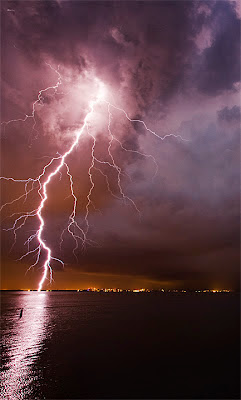 By midday the weather looked promising – big cumulonimbus clouds against deep blue - my kind of sky. I had some things to finish up. Finally, late afternoon, I headed out to see what I could see. By the time I got to where I had a clear horizon, the sky had smeared – a cloudy sky with a few blue patches, Dutchman's trousers I used to call it.   No towering majesties, but there was still interest. The sun, beginning to lower itself into the west, created a low faint rainbow in the east. Nothing spectacular, but worth a smile. The clouds gradually drifted away to hazy banks in the distance. As the sun got lower and lower, I hoped it would do some sky painting, but the distant clouds put it slowly to sleep. I could see rain showers and then some lightning, far away to the north. It would be nice to get some lightning shots, but it was still too light to get the longer exposure times needed. Gradually the storms moved off away behind me, as I hoped some sky scenery would develop for me in the south, where my camera was facing. The clouds grew and changed and faded with the speed of a minute hand. Then, as twilight approached, a flash of lightning. I set the ISO to 50 and stopped the aperture down to f16. A third of a second – maybe I'd get lucky. There were a couple of spectacular flashes just as I was about to release the shutter or immediately after it closed. As the sky darkened and my exposure time slowed to several seconds, the lightning moved away and became reflections of flashes inside clouds, and I hadn't caught anything. The thunder was soft distant rumblings. 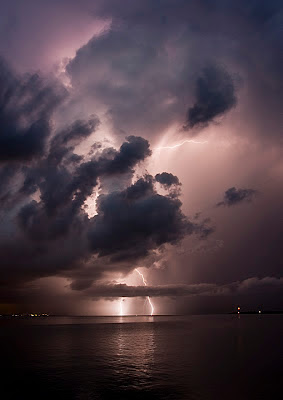 Then, lightning bolts off to my left! The camera had reached its maximum automatic exposure time of 30 seconds and was beginning to increase the ISO. I still hadn't managed to catch a lighting bolt, missing by mere fractions of a second on several occasions. The lightning now started flashing about in the clouds beyond the lighthouse. I switched to bulb, set the aperture to f11 and the ISO to my default of 200. The camera was beginning to have trouble focusing on the darkening low-contrast clouds, so I set one of the AF points on the lighthouse a couple of miles across San Carlos Bay. When the lantern blinked the camera would focus and I could trip the shutter. I was guessing at the exposure times, starting at 60 seconds and gradually lengthening as it grew darker. The lightning started showing off again, occasionally being quite spectacular, and I began to catch a few.  As it got darker, my exposure times grew longer, and by the time the exposure reached four minutes, I could catch a lighting bolt almost every time. I'd close the shutter after a good one, and then try to catch the next one. After a little while the storms moved away. The show was over.

In about an hour, I exposed perhaps sixty frames and caught lightning bolts 16 times, mostly in the later, longer exposures. I didn't get the cumulonimbus skyscape I went after. Isn't that always the way? But I'm not disappointed at all.