The inspiration for this effort was a mural seen in a home decor store - a gymnast on a balance beam, silhouetted against a block wall with a stripe painted across it.  Well, we didn't have a balance beam or striped wall, so we did what we could with what was at hand.  Mary Margaret did several walkover, back-bend, and handstand poses, fretting that she'd kick a light or knock something over. 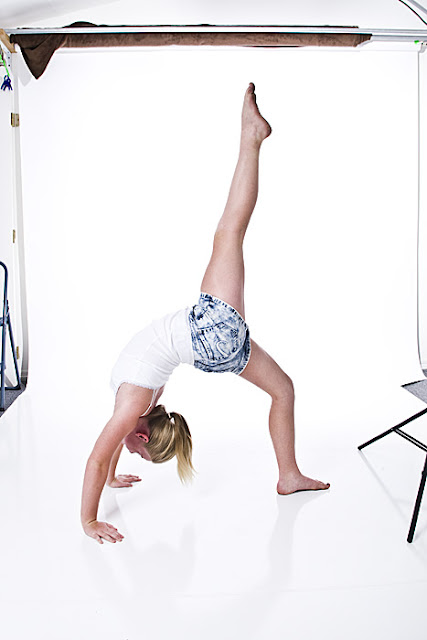 We submitted one of her handstands to USA Gymnastics for the 2011 Year of the Handstand project.  Click here to see that picture in USA Gymnastics' gallery of handstand pictures. 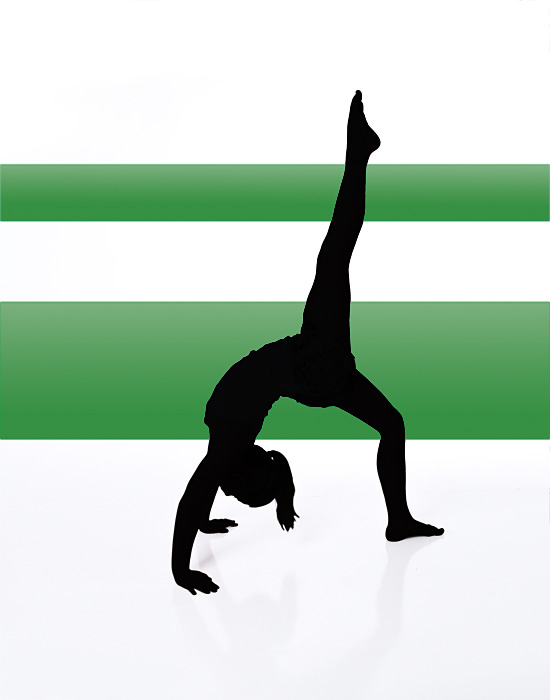 I wanted the floor and foreground to be white, so I couldn't set up the lighting to create a silhouette of Mary Margaret.  I digitally converted her image to a silhouette, retaining just a bit of detail.  The color of the softened-edge stripes, applied with a slight gradient, was sampled from cell-phone photos of her bedroom accents.  The green is supposed to be 'artichoke', but I guess it's really closer to 'bell pepper'.  It is better than my fist attempt, which Mary Margaret derided as color swatch green.

The final print of the poster is 24 inches by 36 inches - for Mary Margaret on her eleventh birthday, September 19, 2011. 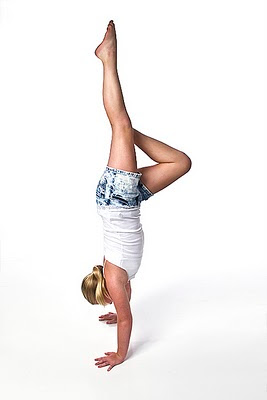 Or - Sometimes self-critique is futile


I like to photograph the old business district of our little one-horse town in the early morning, when there aren't so many parked cars along the curb, hardly another person on the sidewalks (aside from those who sleep there), and I can set up in the street without having to dodge traffic. Driving down First Street one evening I had seen the glow emanating from the front window of the lobby of the Bradford House Apartments, and had made a mental note. So, early one morning I set up across the street from the Bradford and started exploring compositions. A fellow came striding along the sidewalk into the light of the streetlamp. It was about half an hour before sunrise. He saw me behind my tripod across the street. “I hope you don't mind me in your picture“ he said with a smile in his voice, as he walked up to his mailbox. “Nope, that's fine,” I said. “If you don't mind holding still for twenty seconds.” He froze, in the act of inserting his key into the mailbox.  I pressed the shutter button. The exposure was 15 seconds, actually.  “Okay, thanks.” I said, releasing him from his pose. He got his mail, turned, nodded, and went through the door to the apartment lobby. He had caught me before I had found the composition. I worked at it a while longer and then moved on, still not having found what I was looking for. 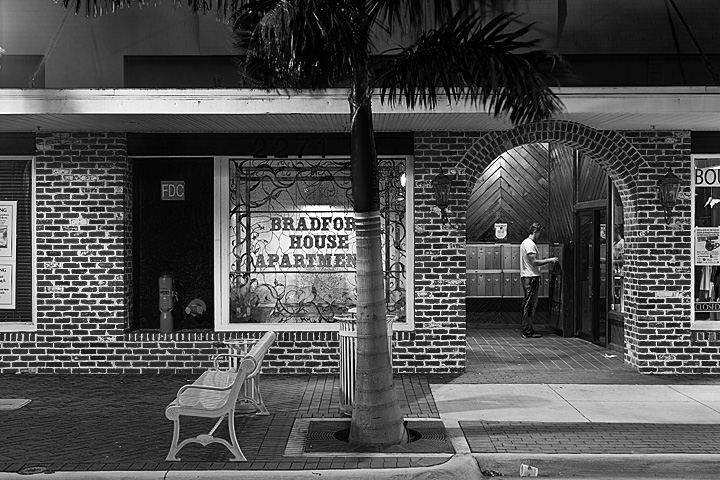 Later, reviewing the results of my efforts, there were no keepers. But somehow I couldn't delete the picture of the young man getting his mail at the entrance to the Bradford House. The composition breaks the rules. Rules are made to be broken, right? No, this was inadvertent.  I'm so habituated to the standard rules of composition I have to make a conscious effort to shoot outside the box. What is this - the rule of halves? So why didn't I discard this picture? It's that young man, a stranger on a deserted city street - he was an active participant in making the picture.  I almost never include people in my photographs. If I do, they are little specks in the distance. But here is a person, clearly, obviously, a subject element of the photograph. And not only that – I had interacted with him. I'd never done that before. So this picture is different – for me.

It's all wrong. The palm divides the picture in two, right down the middle. The young man at his mailbox, near the right edge of the frame, is staring out of the frame. The bench on the other side is facing the other way, facing out of the other side of the frame. It's almost as if it's two pictures, back to back. Maybe somebody sitting on the bench would have helped, I complain to myself. But there wasn't anybody on the bench. There wasn't another soul around – just him and me, briefly, in the early morning light of the street lamps. I can self-critique this picture, but not objectively.  Why did I not discard it?  Is it because there is a human figure in it? I don't think that's it.  It was that brief interchange with a stranger.  That's what made it special for me, and corrupted my objectivity

Really, I know it's just a so-so picture; mediocrity, digitally preserved for posterity. But for me it captured a moment and isn't that why so many of us love to make photographs?  And some photographs, like some blog posts, are better than others, or not.
No comments: