or... Chasing the Sun and the Moon and Catching Clouds Instead 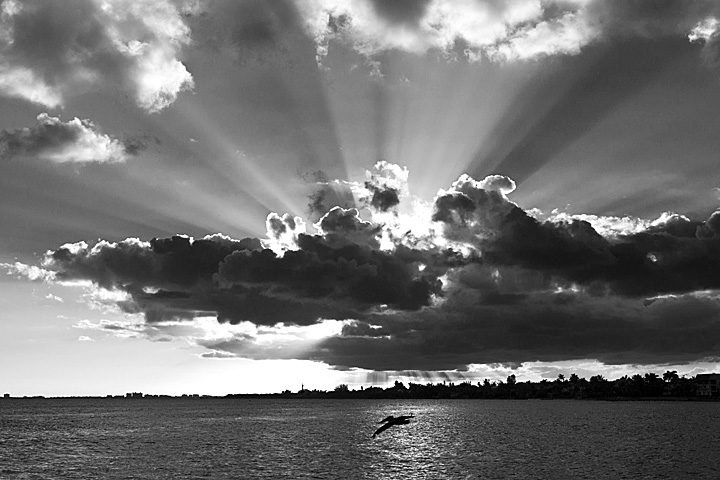 Near the equinox, from a particular vantage, the sun will rise directly behind the lighthouse.  I've been trying, twice a year, to make a good photograph of this.  No luck again this year.  On this particular morning, – the calendar had turned the page to October; the sun would rise to the right of the lighthouse –  one last try.  One more “better luck next time”.  The sun rose into the clouds and started spraying its rays.  I stayed.  I was rewarded with this nice sunburst.  When this pelican flew into the frame, just by luck I managed to catch it silhouetted against the sun streak in the water. 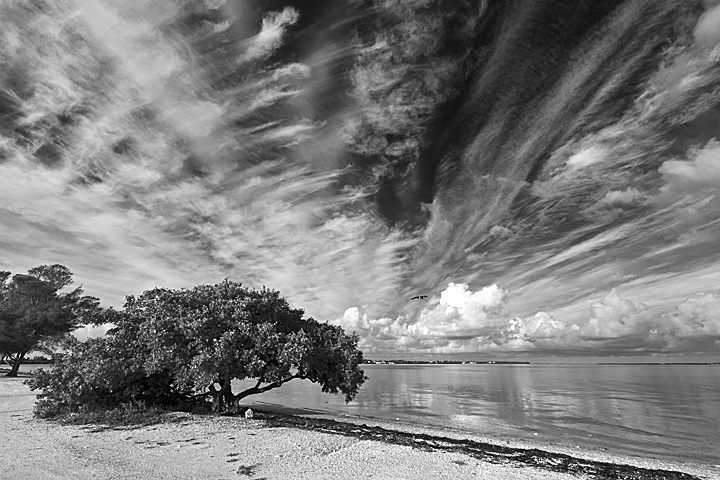 My task this October morning had been to catch the crescent moon rising behind the Sanibel lighthouse about an hour before sunrise.  The sliver of moon rose in a dark sky lightly streaked with wisps and then faded from view before the sun cleared the horizon. I got some crescent moon pictures, but nothing to knock your socks off.  And then, over the next hour, this dramatic cloudscape built up.  Not long after I made this picture, the clouds smeared into a dull overcast. 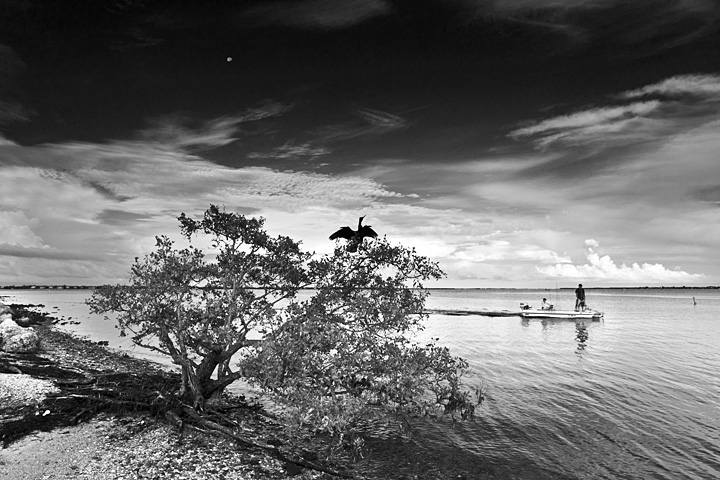 It was the gibbous moon that I wanted.  The moon was setting and the clouds were rising;  the opportunity wouldn't last.  I saw the anhinga in the mangrove; it drew me to this location.  I experimented with the composition – the tree, the bird, and the moon.  I really wanted the moon to be lower so I could make the image with the long end of the range on the 17-40 zoom lens., to fill the frame with the tree and bird, and to make the moon as large as possible.  But it just didn't work.  The moon was too high for that, and would have disappeared in the clouds by the time it was in a better position.  So I moved about, trying this, trying that.  Then the little boat came a long, and, something I don't usually do, I popped off a couple with people in them.   This is the one I chose.  The moon, initially the inspiration for the picture, is a hardly noticeable tiny little bonus.