Melissa Morrison had finally broken off her rocky relationship with her fiance.  Her sister Julie had warned her to stay clear of him, but as he had done before, he wormed his way back into her life.  Julie's worst nightmare came true on Easter Sunday, 2011.  He shot and killed Melissa in her Tampa apartment.

Julie Noble is pissed off. She doesn't want her sister Melissa's murder to become just another statistic of domestic violence. She's working with the Verizon Wireless Hopeline program. Hopeline collects and refurbishes old cell phones and gets them to women in abusive relationships. A person in trouble doesn't need to have a phone service plan to call 911. All that's needed is a working cellular phone.  After being turned away by several large businesses for help in posting or distributing information about Hopeline, Julie found Joe's Crab Shack's Chelsea Ward. With support from Dal Tile and through a promotion by Joe's Crab Shack in October, Julie and Verizon collected 406 cell phones and 330 accessories and Verizon donated $1500 to ACT, Abuse Counseling and Treatment.  Following the month-long promotion at Joe's, Julie and Chelsea asked if I would make some photographs to illustrate their efforts. These are three of the photos we made together. 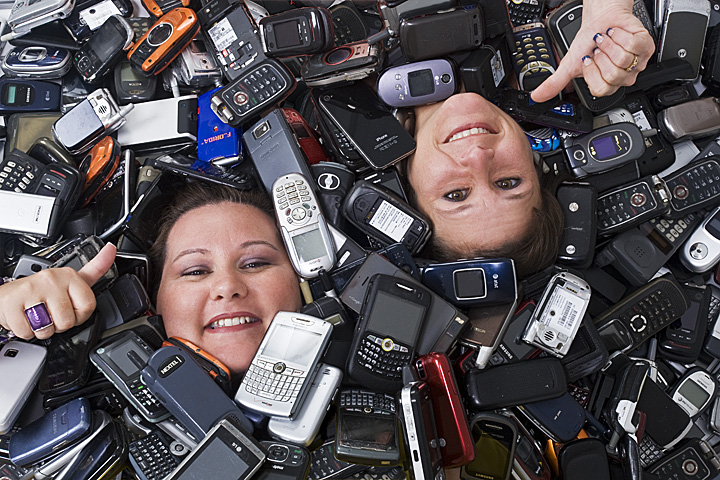 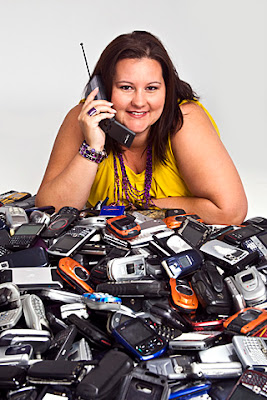 Julie doesn't want other families to learn about domestic violence the same tragic way she and her family did. She wants to get across three important messages:
To learn how you can donate your old cell phone, click here.

I Love the Beach

I love the beach. I always have.   Especially a deserted beach, all to myself.   In a resort area, a deserted beach is hard to come by.   So I like to go early in the morning. It's not always deserted, but it's usually not too crowded. I go to the beach for photographic opportunities. But going to the same beach over and over again... I know, the same old tired photographs.  But...I love the beach.   Let the pix fall where they may. 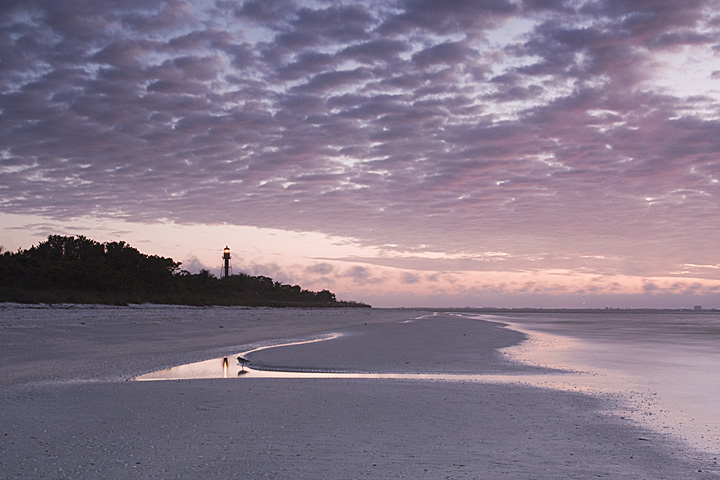 So I went to the beach, full photo paraphernalia and all.  I had it all to myself. Quiet. Solitude. Nature's beauty. I found a photograph to make - no footprints, a little tide pool, a reflection of the lighthouse, a nice cloud pattern, a lone plover. It took several tries 'til finally the plover held still for the entire five-second exposure.   It's not a great photograph, but it expresses my quiet pleasure.   I can't help but smile as I remember. 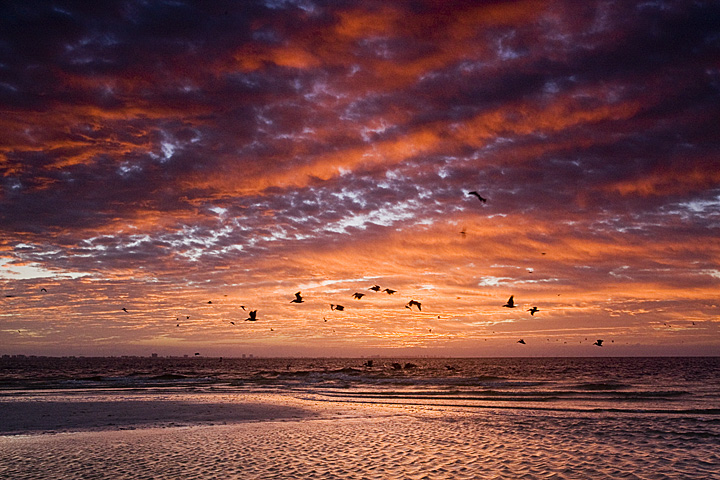 As sun neared the horizon, I walked, strolled, sauntered, along the beach towards the point. As the sunrise grew closer, the pale lavender gradually shifted toward the red. And then, almost suddenly, the color became dramatic. The pelicans and the terns seemed to revel in the glory. The redness erupted into fire for a brief few moments and then faded quickly as Sol entered the sky. This dramatic sunrise color swelled, peaked, and faded in a scant six or seven minutes.

I love the beach.

The River District in Fog

Please, Ma, just let me sleep a little while longer. I'm tired. Oh, well, it's after five, and I'm awake. Might as well get up. A little later than usual, but wait, we were supposed to set the clocks back an hour, so its really not even five yet. Yeah but the sun comes up an hour earlier than it did yesterday. I showered, shaved, dressed, and went outside to check the weather. Hey, we've got fog! Oh, man. I was lying in bed wasting our first fog of the season.


I hurried downtown, to the River District, thinking of scenes of streetlights receding into foggy oblivion.   At my first set up, on narrow Dean Street, after a couple of tentative exposures, a car turned in at the other end of street and stopped, its headlights shining into my lens. The passenger got out, opened the trunk, and started unloading packages. The headlights stayed on.   *Sigh*   I moved on.  It was beginning to get light. I was losing the deserted-city-in- the-middle-of-the-night look I was trying for.   I muddled around framing the Model A in front of Ford's Garage. Not too bad, but that was my last opportunity on this foggy morning for that kind of a scene, as the darkness seeped out of the misty air. 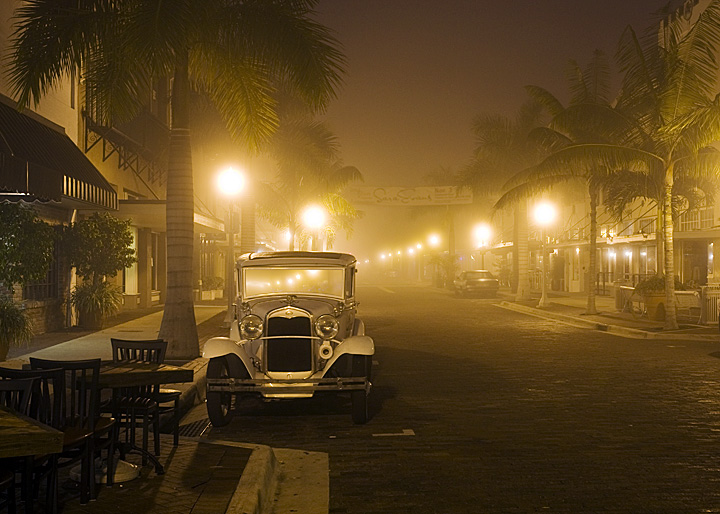 Illumination by incandescent streetlight gives a strong red-yellow color cast to a photograph. In fog the hue seems to fill the air. An adjustment of the white balance in this photograph of the Model A on First Street reduces the too-strong orangey color, and gives the color photo the look of a monochrome photo with a sepia tint. 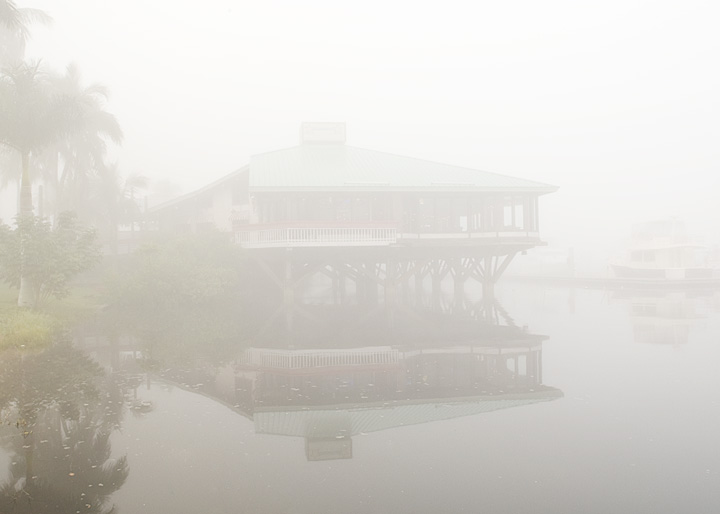 As the morning light matured the streetlights went out, and I drifted along in the fog. A photograph of Joe's in the fog is so different from the one I made last year; nice reflection again, though. 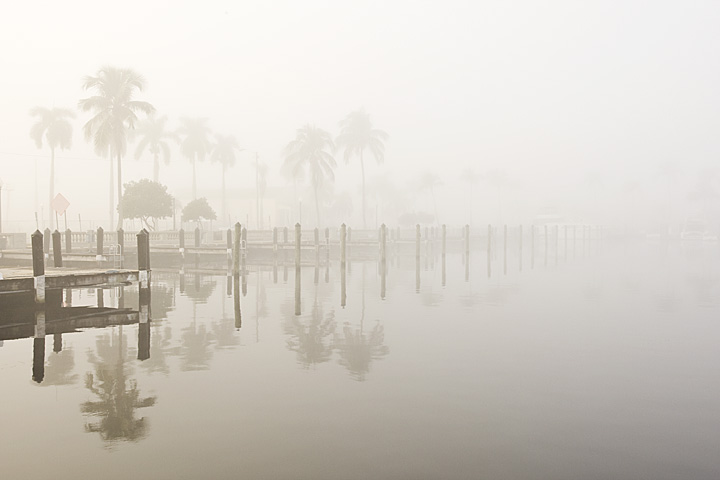 I meandered over to the yacht basin. The pilings, standing tip-toe on their own reflections in the still water, seemed to float on nothingness.  An old gent on his boat called out, “Hey, are you taking my picture?” I hadn't even seen him there. He had just bought the boat, a good sized power yacht, from up on the Peace River two days before. The fog had delayed his departure. He was going up the Caloosahatchee to Lake Okeechobee and then on to Jupiter, his home port. Yes, I had taken his picture, but it didn't survive the cull.


PS.
I prepared this on my nice color-calibrated monitor.  Today I saw these photographs on a different monitor.  They all have a sickly greenish cast, especially the top one.  So, if they look off to you, sorry about that.
No comments:

My intention was to catch a falling star.  I got to the beach about an hour before first light.  The night was clear and dark, but not much happening in the way of meteors.   The Orionid meteor shower was pretty much a no-show.   But I enjoy looking at the night sky. 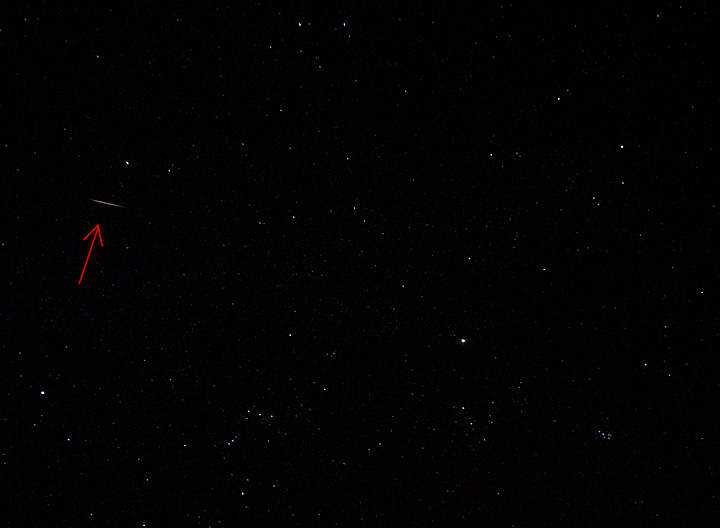 From left to right across the bottom: Bright Sirius, the dog star, then the familiar shape of Orion, Jupiter above the V-shaped horns of Taurus the Bull, and to the right of Taurus, the Pleiades, an open cluster also known as The Seven Sisters. At the top of the frame are the twin stars Castor and Pollux in the constellation Gemini.  And one little shooting star.

The nice thing about being at the beach early in the morning, there's usually something to enjoy, a distant thunder storm, a flock of gulls, or just being there.

The next morning I did it again, and again not was much happening in the sky, but I had the pleasure of meeting a friend who enjoys the same sort of thing.   All in all a good weekend.