and a rant on grayscale


Several years ago, I was in the Everglades with a photographer who was using a large format film camera, you know, the old boxy kind where the photographer puts his head under a dark cloth and views the scene on a piece of ground glass on the back of the camera. He stopped the car on the dirt road we were following and got out and set up, composing a scene of a cypress dome under a blue sky with some clouds. I did the same, but seeing the scene through the viewfinder of my digital SLR, it looked kind of ho-hum to me. “Can I see what you see on your ground glass?” I asked. Instead of inviting me under his dark cloth, he took the red filter from his lens and held it in front of the lens on my camera. “This is what I see,” he said. Through my viewfinder, everything was red, but I was amazed at the difference in contrast. Later he told me that he could see the light bulb go on over my head. It was indeed an epiphany. It was after that that I started doing black and white digital photography.


I've been meaning to write a blog on this subject ever since it came up in the comments of a blog post, Soft and Hard, some months ago. The digital filters that are available to us in editing software, such as Adobe PhotoShop, let us do the same thing my large-format friend did with that red filter in front of his lens, but without having to carry a set of filters around with us in the field and with infinitely greater variety. We can apply these filters to our color digital photographs after the fact. Then if we aren’t satisfied with the result, we can try a different filter, or with digital sliders, we can alter the effective color of the filter to bring out the subtle nuances of the image we see in our mind's eye. There are other ways in digital editors to create black and white photographs, such as working with the various channels. Creating and manipulating a black and white layer is the method I use, for now. 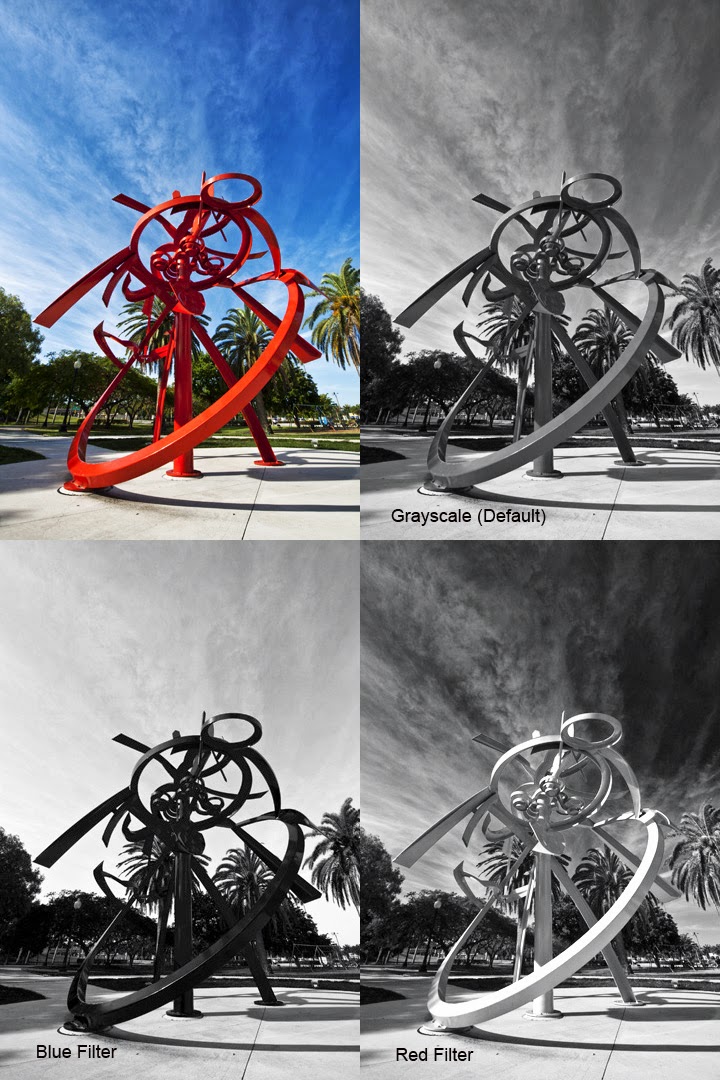 In his book, Examples: The Making of 40 Photographs, the great master Ansel Adams often tells us of his use of filters. An orange filter was one of his most used. I usually try first the yellow filter and then the red filter, and sometimes adjust the sliders for something roughly between the two. (PhotoShop doesn’t give us a preset orange filter.) A filter will lighten its same color and darken it's complementary color. A blue filter lightens blue and darkens orange; a red filter darkens blue and lightens orange. See the illustration above.  (The purpose of the photos in the illustration is simply to show the versatile tonal editing options available to the digital photographer, and not to demonstrate artistic values.)

To Reduce Glare and Reflections

These photographs were made with a polarizing filter attached to the lens. For the photo on the left, the filter was set for minimum effect, and for the one on the right it was rotated 90 degrees for maximum effect. As you can see, the polarizer eliminated almost all the glare from the water. Not only did the polarizer remove the glare, but it also removed the reflections. In the photo on the left you can see the reflections of the trees and sky. The highlights in the water are not actually direct sunlight, but are reflections of the overcast sky. In the photo on the right, the water is clear and you can see the bottom. Dialing in the polarizer also eliminated the shiny highlights from the leaves and from the scales of our little reptilian friend.

A polarizing filter will reduce the light reaching your sensor by a stop or two. In that regard, it can perform as a neutral density filter, should you so desire. Some folks are so enthralled by the wonderful things their polarizing filter can do that they keep it mounted all the time, but in most cases I think one should remove the filter from the lens if it isn't needed. In this example, dialing in the polarizer reduced the light by another full stop. Both photos were made at ISO 400 and f8, using aperture priority with +1/3 stop of exposure compensation. The exposure time for the photo on the left was 4/10 of a second and 8/10 for the one on the right. It was an overcast day, deep in a cypress swamp – not enough light for hand-holding, especially so with the filter attached. (Even though the camera was tripod mounted, I'm ashamed to admit that I did not use proper slow-shutter-speed technique, e.g. mirror lock-up and cable release, for these photos and so their sharpness is wanting)

The handsome creature on the log is a cottonmouth water moccasin, a venomous snake. In my experience, the reputation of the cottonmouth for being aggressive is greatly exaggerated.